Seems simple enough. Take off your clothes… and walk!

As it happens, neither of us have ever considered ourselves even remotely athletic. In fact, one could argue that a big part of what drew us into naturism in the first place was simply coming to terms with our own bodies. Neither of us had the talent nor the desire for championship skiing or body-builder weight-lifting, let alone the determination to train for bicycling across Europe. But a good brisk walk? We’re all in! Especially if it can be done in the buff.

And so it goes… that the main criteria for naturist places that garner our highest marks are those that offer the opportunity to move. In the best case, that means at least an hour’s walk at a brisk pace of about four miles-per-hour, which is about as fast as most people can walk before breaking into a run.

Doesn’t matter to us if it’s a circuit around an expansive naturist resort, or a walk along the sea where nudity is tolerated, as long as it doesn’t require getting dressed. So here is Part One of our recommendations for naked walking, hoping this will inspire a few readers to share their favorite places with us for future exploration. 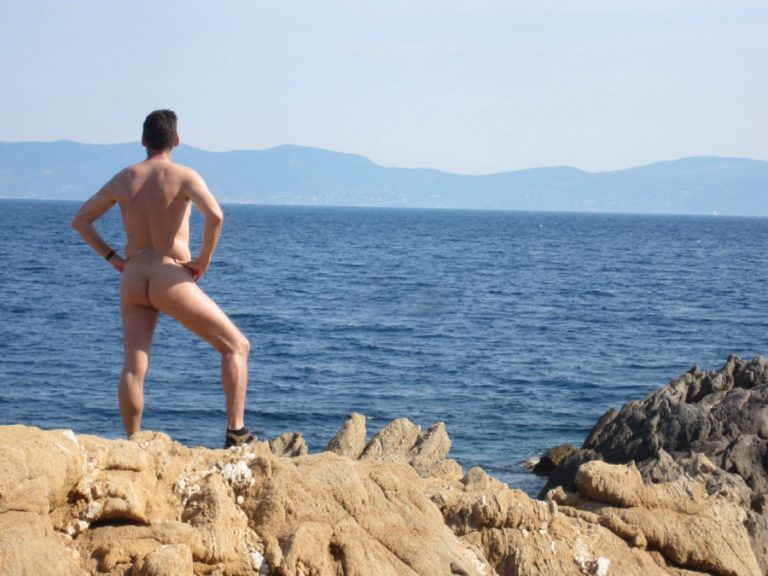 The naturist resorts on the Istrian peninsula are among the largest to be found anywhere on the planet. We are particularly fond of Valalta and Koversada – two resorts that face one another on opposing sides of the Lim Fjord near Rovinj. Each offers a wide variety of accommodations, and you can come pretty close to clocking your four miles simply by walking the periphery of each resort. During our last visit to Valalta, we finally figured out how to hire a water taxi from one resort to the other so we could enjoy the amenities of each, which has the potential of doubling your mileage, including a walk across the bridge to Koversada’s naturist island with our favorite fish restaurant.

Naturism is practiced throughout the Dalmatian Islands, but becomes less common as you work your way south toward Dubrovnik, due in large part to the increase of traditional tourism in the south. We have found some lovely resorts and beaches on Rab and Krk, but in terms of naked walking, our most satisfying stay was at Palmižana on a small island near Hvar, where walking naked on the trails and shorelines of the island seemed completely acceptable to the locals. Not that we passed lots of other naked people, but nobody seemed much concerned about our nudity. That works.

*See the comments below from Dalmaitian Traveler on the topic a naturism in Croatia. Insightful, I think. 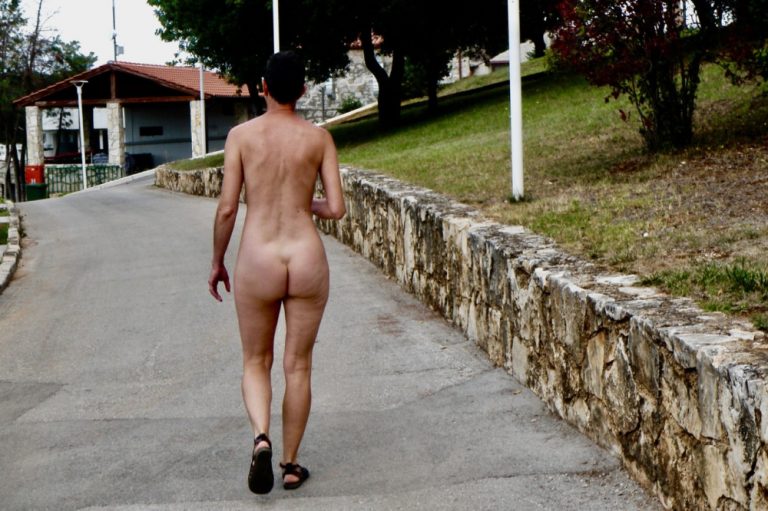 The Cote d’Argent, or Silver Coast of France, refers to the wide, infinite beaches of the Gironde Peninsula west of Bordeaux, on the Atlantic Ocean in the southwest corner of France. Despite the fact that the weather is not as dependable as that on the Mediterranean, this is where one will find the largest naturist centers in France, including Arnaoutchot, La Jenny, Euronat, and CHM Montalivet.

If you’ve been following our blog for a while, you know we are partial to La Jenny, due in large part to the fact that a walk from one end of the resort to the other and back to your chalet will likely take the better part of an hour even if you resist a deviation across the dunes to the beach. If you really want to stretch your legs, you can walk for miles on the beach in either direction without worries about needing to cover up. Even if you have enough stamina to make it to the next village up the coast where most people are donning swimsuits, it seems the locals have grown accustomed to the random naked person wandering along the surf, and scarcely bat an eye.

Interestingly, there is a bike path that runs behind the dunes for much of this coastline, and from time to time, notice goes out that the gendarmes are “patrolling the path” to issue citations to those who think they can cross from the resort to the beach without at least covering one’s genitalia. We’ve never been the subject of such an interrogation, but it all seems pretty absurd, since anyone traveling the bike path will have certainly encountered naked people through the wire fence while passing the resort. Should someone stop anyplace in this region to have a peek over the dunes to the beach, chances are better than not they will be accosted with naked bums – young and old. But back to the point, we typically keep a pareo handy just in case, but rarely bother to wrap up, even at the risk of being caught with our pants off. 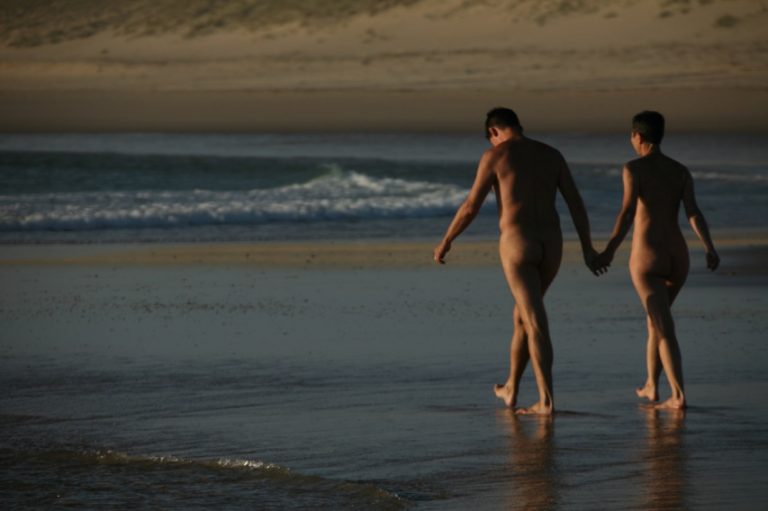 I’ve written quite a lot about Ile du Levant over the years as we tend to visit annually, if only for a long weekend each year. We think it’s just the right balance of civilization and wilderness, with several excellent restaurants (some of which encourage naked dining!) and a seaside trail that is especially inviting early in the day before the heat makes the walk back up the hill into the village too intense. (We’re fond of staying at Heliotel near the center of the village at the top of that hill, which means a steep climb at the end of any trek to the sea.)

Nudity on Ile du Levant is more complicated than one might think, (see our previous blog post, “Yet another round of CRAZY on Ile du Levant“) with strict rules pertaining to nudity near the ferry port, as well as a quirky policy that allows you be completely naked in the town square as long as you don’t stop to chat with a friend, in which case, you’re required to wear “le minimum” or face a potential fine. Reportedly, nobody ever gets more than a warning, and even those are seemingly rare, but it’s an ongoing controversy that keeps the French naturist community abuzz. It’s easy to find your way around the island without crossing the square, though you can’t get to the island’s only sandy beach without passing the port, which requires covering up for a minute or two until you’re a hundred meters or so around the corner. Of course, the curious people on the ferry will still see naked people if they’re looking for them, some who appear delighted to smile and wave to passengers from the rocks just beyond the port area. Yet another exercise in prudish futility. 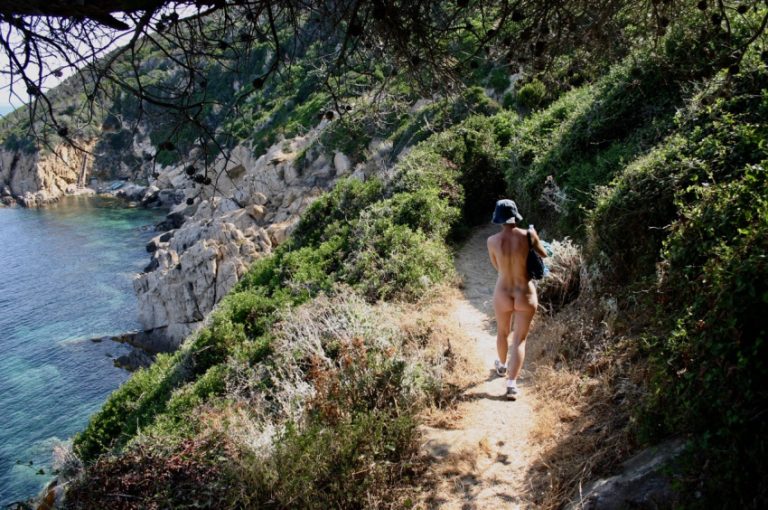 I think France boasts well over 200 naturist establishments, though we think Club Origan is particularly special, if only for the naked walking potential. Situated about an hour north of Nice in a steep valley in the Var, the resort lies just above the village of Puget-Theniers. Accommodations range from tent camping to modest portable type bungalows, but it’s the location that makes the place. Since the property line extends well up the hillside toward the ridge, a trail looping from one end of the resort, along the ridge, and down the other side provides a solid hour-and-fifteen minute daily workout, providing you’re in good enough shape to scramble up the mountain in good time. The views are spectacular, and the mountain-top blue skies are exactly what you’d hope for when you think of the South of France.

Alternatively, you can make your way past the front gate and about another 20 minutes down the gorge to the river where apparently locals who ride the commuter train up the valley have grown accustomed to the naked people frolicking in the water. In either case, summer days in Provence can become unbearably warm, so we try to work out our day to take on the mountain while the air is still cool. And since you never actually leave the property of the naturist resort, you don’t need to worry about covering up en route. 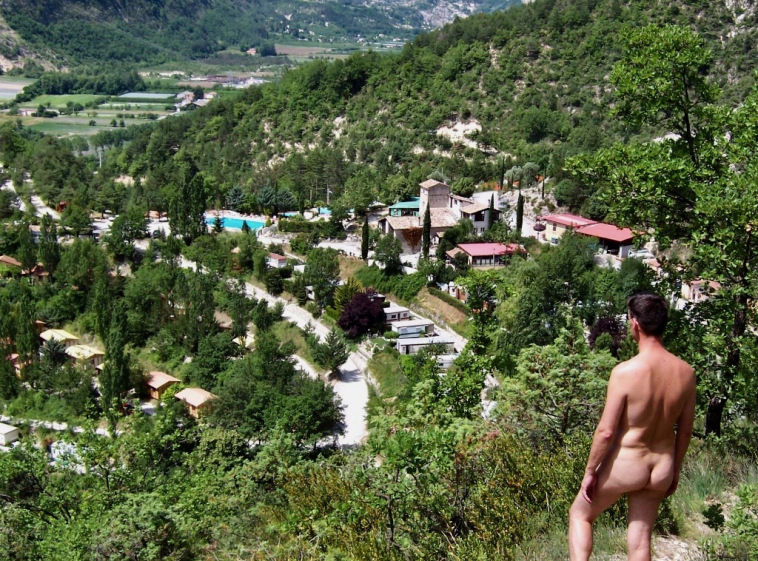 While officially part of France, Corsica has a culture that is uniquely… well… Corsican! I suppose that an inherent peril of being located in such a strategic location just off the coast of mainland Europe is that just about every modern civilization has tried to overrun the Corsican people at one time or another, but as of this century, the people on Corsica speak French (and Corsican!) while the people on the next southerly island – Sardinia – speak Italian. Fortunately enough, with the French language comes a proliferation of naturist places, making Corsica the preferred naturist destination of these two Mediterranean islands.

The long, sandy Linguizzetta beach on the eastern coast of the island must harbor at least a half-dozen naturist resorts, several of which cater specifically to sun-seeking Germans. We once stayed at Riva Bella, which is essentially isolated from the others, and more recently at Bagherra, where you can walk naked directly to the beach and keep right on going north for several kilometers until you might notice a sign that indicates the end of the naturist beach, where we then found a woman who spends her days yelling at naked people (like us) who disregard that sign and keep walking.

We are also fond of La Chiappa, where – in addition to enjoying the amenities there – you can make the 40-minute trek on the seafront trail around the cape of the island to a sweet little beach called Tahiti Plage where you’re likely to find a balanced mix of textiles and naturists, young and old, peacefully co-existing. There’s even a modest snack bar hidden in the trees, but you’ll need to cover at least your waist should you wish to stop in for refreshments.

Corsica has some interesting options inland as well. Especially stunning early in the season (before things get too dry) is the secluded and rustic U-Furu naturist camping that offers a 30-minute walk up to a series of pools, and if you’re timing is right, a progression of waterfalls. A great place for a picnic and some stunning naked photo ops.

On our last visit to the island, I picked up a trail guide to the vast network of hiking routes on the island, and we found a couple that were particularly remote where I was brave enough to get naked even though my wife was not so brazen. The few people we passed along the way seemed unfazed by my lack of clothing, though I had a pareo handy in case we came upon a family. One trail led to another remote waterfall where sunbathing on the adjacent rocks was simply too enticing to resist. It seems on an island the size of Corsica, the possibilities are endless. 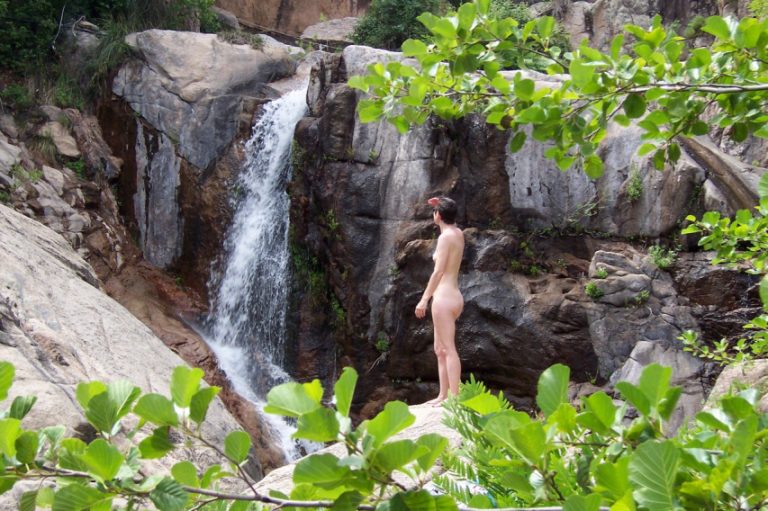 We have also found excellent naked walks on the Canary Islands, the Greek Islands of Crete and Gavdos, on Mallorca, as well as mainland Spain, which will be good fodder for the sequel to this post. We have also found beaches in Uruguay and Australia expansive enough for a viable walk, and I’ll also give a shout-out to our favorite place on US soil located in the high-desert above San Diego where you could probably walk for days along the abandoned railway tracks.

In the meantime, if you know of a great place for naked walks that we haven’t found already, please comment here so we can go find it and explore.

Life is too short to go walking with clothes on!