It’s one thing to find a place for nakation that allows for a leisurely afternoon of nude sunbathing by the pool, but what if you are the restless type who needs to get up and stretch your legs now and again? Such was the topic of my previous installment called I ❤️ Naked Walks, focusing on a few of our favorite places in Croatia and France where naked trekking is possible.

The second installment in this series takes us hopping to the island of Crete, and even farther south to the incredibly remote island of Gavdos. Later, a few musings about the Spanish territories of Mallorca and the Canary Islands of Lanzarote and Fuerteventura – all of which afford fabulous naked walks along the sea.

We first visited Crete in 2008, flying into Chania with a good helping of fear and trepidation about renting a car to drive over the rugged mountains to the southern coast, where one will find Naturist Resort Vritomartis perched on the cliffs overlooking the Libyan Sea. Turns out the drive isn’t really that scary if you simply keep your eyes on the road, and even better now that they’ve reworked the tunnels that take you over the mountain pass with a few less encounters with wandering goats.

Just a short walk down the hill from Vritomartis is Filaki Beach, one of the only fully authorized naturist beaches in Greece. It’s actually a decent walk down to the road to the beach, and in recent years, the message has been to cover up when en route, though we find compliance with that rule to be hit and miss, and we have yet to be admonished when risking the right to bare all.

From the nearby village of Chora Sfakia, you can hire an early morning water taxi for a 15 minute clothing-optional boat ride to Sweetwater beach where you’ll find a nice mix of naturists and textiles, and even a snack bar that requires you to at least make an effort to wrap in a pareo should you wish to have a beverage or a sandwich. After a morning snooze under the scrubby trees, you can follow the coastal path to the east that will eventually bring you to the stunningly beautiful village of Loutro. I’ve made a habit of making the trek au naturel, though you most definitely need to cover up before entering the village, as there is even signage that forbids topless sunbathing near the hotels. You’ll get a good hour of naked trekking before you arrive, and there are plenty of spots to jump in the sea along the way if you’re feeling overheated. Once in Loutro, enjoy a frosty beer and some calamari along the marina before boarding the ferry back tho Chora Sfakia, thereby completing the loop!

The Vritomartis animation team organizes a wide variety of excursions each week, and we make it a point to plan our stay around the guided hike down a remote gorge that’s well off the beaten track of the more heavily touristy treks. After an exhilarating open air ride (in the back of a pick-up truck) up the hill to the trail head, the walk itself is typically about 90 minutes, followed by lunch (clothed) in the taverna in a neighboring village. I suspect there are other remote trails on Crete where naked walking would be tolerated, but again, we always exercise caution to avoid offending the locals. 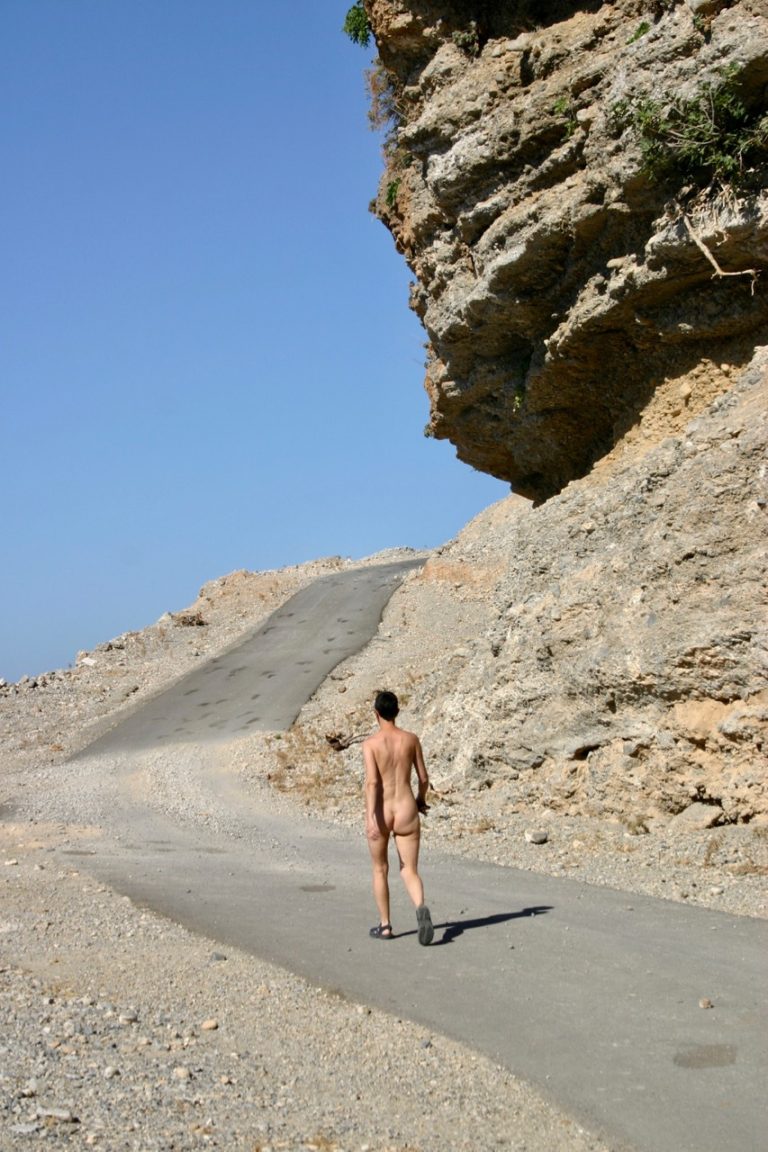 We have made it to Gavdos twice, once on a smallish ferry that makes the round trip most days of the week from Chora Sfakia, and then a couple years later on the car ferry that runs on something of a “when we feel like it schedule” from several small ports on the southern coast.

Once considered a hippie enclave where nudity on the beach was largely the norm, Gavdos has become increasingly gentrified with the addition of several small hotels found on commercial sites like Booking.com. But we had no trouble finding roads and trails leading to various idyllic beaches where nobody seemed to care when they came upon naked hikers. Our personal favorites would have to be the walk from the sleepy village of Vatsiana all the way down to the Tripiti beach – the most southerly point in Europe – and on the north shore, Pyrgos Beach, reached by a trailhead that leads down the gentle slopes to one of the most beautiful beaches I’ve even seen. I have made the walk twice and only passed a couple others along the way; none of whom were naked, but none who seemed the least bit concerned that I was! 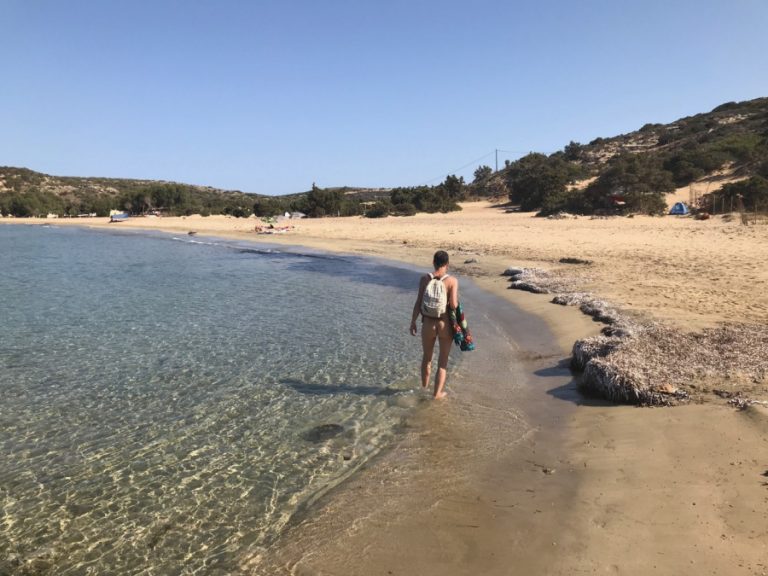 I’m still trying to figure out the complexities of naturism in Spain, which is even a bit more complicated on the islands that fly the Spanish flag while maintaining their own customs and traditions. That said, it seems one could get themselves in trouble pretty quickly by getting naked in the wrong place at the wrong time on Mallorca, but when it comes to the seaside trail along the coast near Colonia San Jordi, it seems that nobody much cares. The famous Es Trenc beach is well known for clear turquoise waters as well as sustained popularity with people who celebrate their aversion to swimwear. That seems to have set the tone for the trails that stretch eastward toward the lighthouse near Ses Salines and onward to the gorgeous little cove where you’ll find the smallish Mármois Beach tucked away with it’s pristine sandy beach.

While staying at the nearby Skinny Dippers Naturist Retreat, we’ve made it out daily routine to arrive at the trailhead by sunrise each morning to exploit optimal lighting for photography while beating the heat of the day.

We’ve found a few other “naked tolerant” walks on the island as well, most notably the north coast beach that stretches to the west from Colonia de Saint Pere, but we much prefer the walks near Ses Salines as we have covered at least fifteen kilometers and have yet to exhaust all the naked walking options therein. 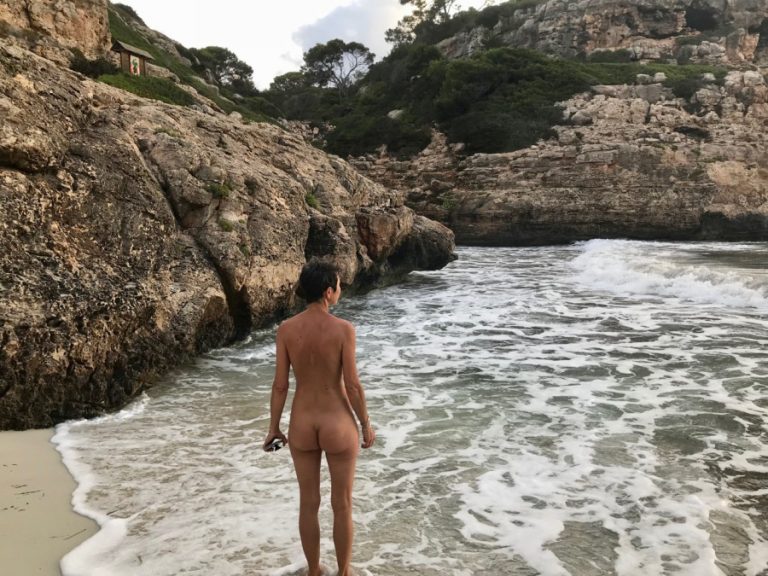 So… if you take a couple really big volcanoes, drop them in the middle of the Atlantic Ocean off the coast of Morocco, then add a few millennia of lava flows and sediment accumulation, you end up with several barren little islands that are a little tricky to get to, but well worth it if you’re looking for a nakation spot that’s reasonably warm for most of the year.

We made our home base at the naturist village Charco del Palo, which is little more than an assemblage of self-catering apartments, a modest grocery store, and a couple local eateries that may or may not be open, depending on the season. But what you can count on is lovely beach walks in either direction from the village, without the need to even carry a pareo unless you plan on pushing the boundaries by getting too close to the neighboring villages.

While one of the locals warned us about being judicious when naked elsewhere on the island, it seems that some of the mountain trails offer excellent opportunities early in the morning, providing breathtaking mountaintop views along the way. If that seems too daring, you can most certainly count on a nice beach walk at Caleta de Famara, where we found a fairly even divide between the naked and the clothed. The bluffs along the Costa de Papagayo also seems suitable to naked trekking, with the nudist beach Playa Congrio nearby. 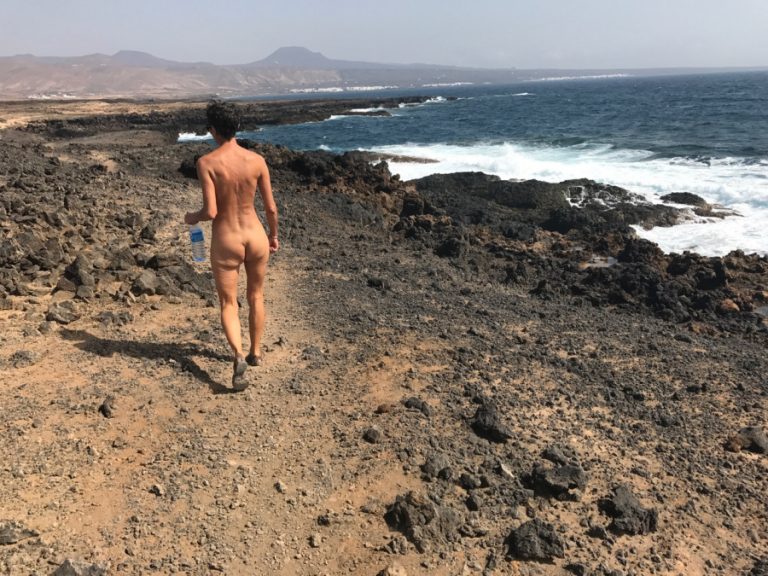 If long naked walks on an infinite sandy beach is your main squeeze, then Fuerteventura may well be your ultimate nakation destination. We spent a few days at each end of the island, first in Corralejo where we stayed in a naturist hotel that closed shortly after our visit. From that location at the edge of town, it was possible to walk quite a distance a la nude if you were willing to cover up now and again for the textile beaches adjoining to super-hotels about a mile down the beach.

But the real prize was the beach near Morro del Jable where we stayed in the apartments at Naturist Monte Marina. While we had to wrap up for the five minute walk to the beach, once along the sea, we set our sights a bit farther each morning expecting to come to a place where we would need to cover up. After walking nearly an hour-and-a-half one morning, we did finally reach a textile beach where we were feeling conspicuously naked, but I suspect had we just kept on heading north, we could have continued another hour or two. And even in August, the weather was perfect with the cool breeze coming off the water, which made 90-degrees days absolutely bearable if not downright pleasant.

So, I think I have one more installment left in this series of places for naked walking, as I have yet to talk up DeAnza Springs in California, and a couple more European locations that I will have a chance to visit in early June, so I may hold back on Part 3 until that critical research is complete!

In the meantime, I’m always looking for another place to get naked, and all the better if it allows the freedom to get out and about… in the altogether, of course!